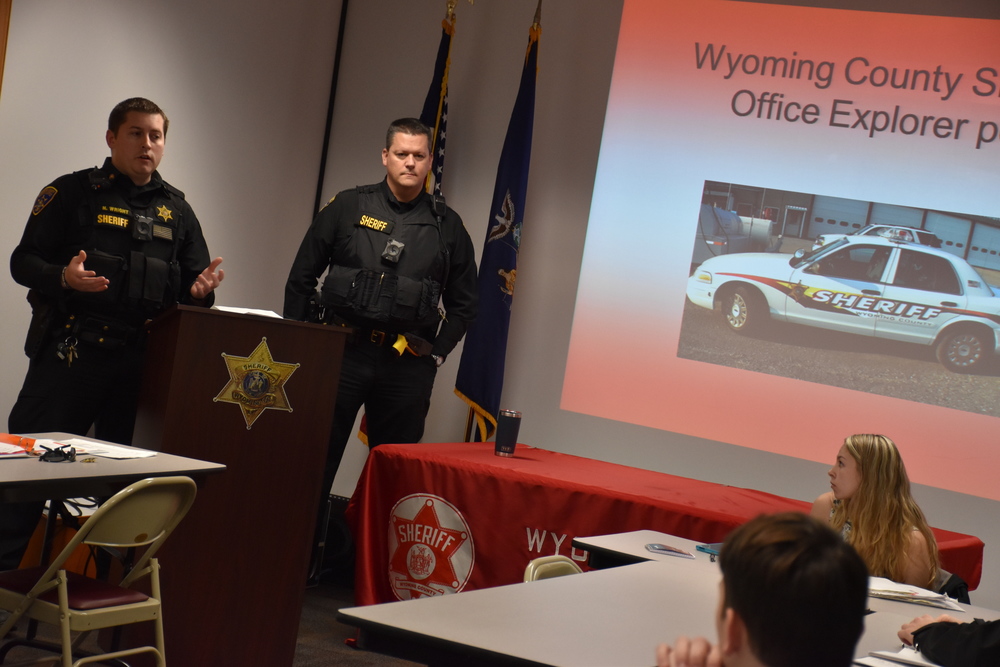 Sam West was a green 20-something when he joined the Wyoming County Sheriff’s Office in 1998. Back then, West said he lacked the people skills that, today, allow him to leave the scene of a traffic stop confident he’s gotten through to the driver he’s just pulled over, without necessarily having to write a ticket.

“Before, I was less likely to educate them and more likely to just write a ticket and be done with it and move on,” said West, the school resource officer at Attica. “Now, it’s completely different."

West changed his approach and gained the people skills necessary to have that kind of interaction with members of the public over the course of his quarter century in law enforcement. But the Sheriff’s Office’s Explorer Program aims to give potential future members of law enforcement a head start in developing those people skills, among many other things, so that if and when they do join the field, they’re better able to engage in meaningful and productive interactions with members of the public from day one.

Open to Wyoming County residents between the ages of 14 and 21, the program aims to expose participants to the different things one can expect from a career in law enforcement.

West, who helps run the program, said he teaches explorers everything from how to work a radar gun to how to properly administer the field sobriety tests deputies use to determine whether a driver is intoxicated. Deputies in the Sheriff’s Office’s communications division train explorers on how to field 911 calls and use the 911 emergency call center while deputies in the jail division offer training in processing arrests and facility security.

Explorers attend monthly meetings at Sheriff’s Office headquarters in Warsaw and participate in ride-alongs with deputies to get a firsthand perspective of their day-to-day responsibilities.

Sometimes during ride alongs, West may test explorers’ memory and attention to detail by stopping his cruiser and asking detailed questions about where they are at that given moment.

“What if something happened right now and you had to call on the radio? What if I had a heart attack and keel over right here? Where are we?” said West, giving examples of the questions he might ask an explorer. “What road are we on? What's the next intersection? What’s the next road up there? Things like that, and that can be pretty overwhelming.”

West even goes over the finer points of report-writing - something, he acknowledged, nobody wants to do that, nevertheless, is everywhere in law enforcement.

Jamie Premo, a junior at Attica High School, has long cherished a dream of becoming a police officer. So when West told him about the explorer program last year, Jamie jumped at the chance to join up.

“We do ride alongs, we do training - everything basically to learn how to become a cop and a good one,” Jamie explained.

During one recent ride-along, West and Jamie responded to a call for a man that was out of control and punching the exterior of his home.

West and a fellow deputy made a mental health arrest and transported the man, who was high on methamphetamines, to the hospital where he received treatment.

Jamie, who stayed in West’s vehicle while West and a fellow deputy talked to the man and took him into custody, said the experience was eye-opening, and taught him just how much drugs can change a person’s behavior.

“People can do some stupid stuff - especially with drugs,” he said.

Jamie said the ride-along with West only strengthened his desire to pursue a career in law enforcement - “I would like to do it more, actually,” he said - and encouraged other Attica students to consider joining the program if they’re interested in learning more about the field.

In order to be accepted and remain in the program, members need to maintain a C average in school and uphold a high standard of personal conduct.

“If it’s really minor it’s one thing but we don’t really give a whole lot of leeway,” said West. “Holding them accountable is very important because we know they will be associated with the Sheriff’s Office, so if they screw up or they do something bad, we’re pretty tough on them.”

Explorers in Wyoming County’s program have gone on to become corrections, police and immigration officers. Others have entered careers in the U.S. Armed Forces. Some have even been hired on as deputies at the Sheriff’s Office, said West.

One such former explorer is Kyle Murray, a 2010 Attica graduate who now splits his time as an officer for the Attica Police Department and a deputy with the Sheriff’s Office.

Murray had for a long time been interested in pursuing a career in law enforcement when he joined the post as a 14-year-old and soon started going on ride-alongs - usually with Deputy Dan Kemp.

“I was able to witness the deputies speak with people during calls and develop communication skills that way,” said Murray, who’s worked in the field for the past four or five years. “If there’s a student interested in law enforcement, I think it’s extremely beneficial. It gives you a sense of what the job’s about, what you do on a daily basis. I just think it gives them a good sense of what the career’s all about.”

West said one of the program’s chief benefits is in getting explorers out in their communities, interacting with members of the public - “You’ll get to see humanity. Sometimes it’s great, sometimes it’s not,” he said - and in cutting through the popular, and often inauthentic, representations of law enforcement on TV and in movies.

“Oh, I put a uniform on, I go in, write a couple tickets, I shake a hand or two, I put a bad guy in jail and go home. Oh my goodness, it is so not that,” West said with a laugh. “This is a good opportunity to get out there and see some things and actually get to talk to people and learn what the public is like because a lot of people don't have a clue what the public is really like and it’s really shocking sometimes.”

It also helps build the next generation of law enforcement, said West - something that is extremely important for an agency like the Wyoming County Sheriff’s Office, about 50 percent of whose members have enough years of service to retire.

Nick Wright, a road patrol deputy who runs the explorer post with West, said at a minimum, the program  can help those considering a career in law enforcement decide whether it’s a path they’re interested in pursuing.

“You have these young adults, they spend this money to go to the police academy and it is pretty expensive and they’re halfway through the academy or in their field training program or they’re into the job and realize ‘It's not something I want to do, it’s not something I like,’” said Wright. “And I give ‘em credit - why stay in a career field that you're not going to give your heart and soul to? But this program - it’s free of charge and it gives them insight into law enforcement so they can decide ‘Yeah, I do want to get into it’ or ‘No, I don't.’”

Wright and West are working to schedule an open house at the Sheriff’s Office, 151 N. Main St., Warsaw, for those interested in learning more about the explorer program. Wright said they hope to decide on a date “in the near future.” 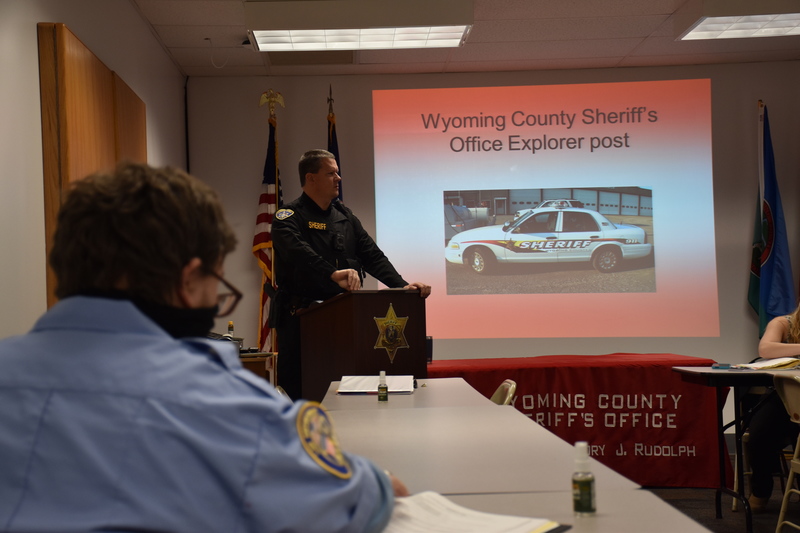 Jamie Premo, left, a junior at Attica Central School District, listens as Deputy Sam West of the Wyoming County Sheriff’s Office leads a meeting of the Sheriff’s Office’s Explorer Post at the end of November.