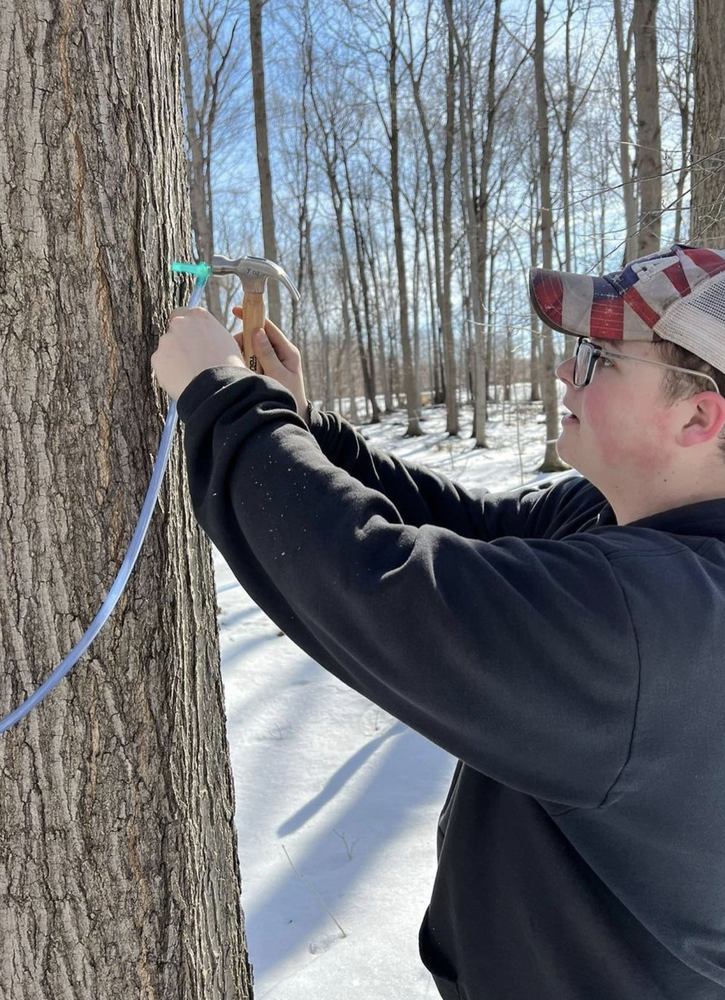 It’s that sweet, sticky stuff that takes a stack of pancakes from circles of stodgy flour to divine revelation. Without it, French toast is just soggy, egg bread and a Belgian waffle is little more than ironed batter. We’re talking, of course, about maple syrup and here at Attica Central School District, our agriculture students are making it by the gallon.

Attica’s maple program can trace its roots to 2013, said the district’s Future Farmers of America chapter advisor Michelle Barber, back when the FFA “was just a little club” former advisor Jodi Rudgers would run at lunch time

“She’d go out with the kids, put up buckets and collect it and she’d haul it herself to A&A Maple and go from there,” said Barber.

Attica’s maple season usually begins in February around President’s Day and wraps up at some point in March, said Barber

This season, junior Ty Baker has been taking a prominent role in making sure FFA’s sap-collection operation runs smoothly. Ty, whose grandpa and uncle run MB Maple Farms down on Clinton Street in Attica, brings ample experience to his role.

When Ty first started helping out with the district’s mapling program, it was still using solely buckets to collect sap. While the district continues to utilize the bucket-collection method on about 20 of its trees - primarily as a means of introducing younger students to the field - most of its 100 or so tapped sugar maples are hooked into a centralized line-collection system that’s more reliable and efficient.

“All of our lines go into a central, stainless steel milk tank that was donated by Merle’s Maple a couple of years ago,” explained Barber. “We have a pump that we purchased and Ty goes out - by himself usually because of timing - and he pumps it from the main tank into a mobile tank that we’ve mounted to the back of the district’s Kubota RTV and at the end of the day, on days there’s enough sap, he goes to Todd Hofheins’ Maple Moon Farms and pumps it into his evaporator system.”

Ty said a line collection system holds quite a few advantages over the more traditional, bucket collection method. For one thing, buckets like to blow over when it gets windy, he said, and need to be emptied of sap daily. With a line collection system, wind poses no such risk. Sap runs constantly into a central tank, which can then be emptied in one fell swoop. And while a tree may fall across a line every once in a while, “It’s not that big a deal to go pull a tree off of a line,” said Ty.

“40s would be good, low 40s,” said Ty of an ideal, daytime temperature. “You don’t want it too warm because then you'll have the trees prematurely budding and you don't want that happening too early because then your syrup will start to taste sour.”

Throughout the maple season, Ty keeps track of sugar levels and monitors sap quantities so that, come the end of the season, the FFA chapter knows the quality of the syrup it’s produced.

“Last year we got about 12 gallons when all was said and done,” said Barber.

In the past, FFA has used the syrup for its pancake breakfast, but the pandemic forced the cancellation of the fundraiser last year and this year, said Barber, so FFA ended up selling its syrup back to the district for its food service staff to use in its cafeterias. Barber said they’d probably end up selling most, but not all, of this year’s syrup harvest back to the district as well.

“We’ve also had a lot of teachers ask if they donate to the FFA, would we be able to come up with some syrup,” said Barber. “So we might be able to do that too, with some smaller containers.”

This season, in addition to making sure the district’s sap-collection efforts run smoothly, Ty has been introducing some of Attica’s younger ag students to the mapling process.

“The middle schoolers - their main progress has been with the buckets. They can get involved but they don't know the science of the lines yet and then if they want to pursue it, I’ll teach ‘em about the line collection system,” Ty explained. “You have to have the drive and the motivation to learn about it because it can get pretty complicated out there.”

Added Barber: “Maple’s always been a hot topic with our FFA because we either have kids that love it or kids that have 0 interest in it whatsoever. It’s one of those things that really appeals to those kids who want to be outside in the woods. It’s funny because it's a very definite line - there's really no middle ground.”

“You’ve got to get going and you've got to tap and you've got to get everything ready in a small amount of time. When sap’s running, you’re running,” Ty said. “The first boil last year I was with my uncle and we started boiling probably 7 o'clock at night and we didn't get done boiling until the next morning at 7 o'clock, so there’s some late nights involved in it.”

That understanding and appreciation of the work and preparation needed to ensure a productive maple season is something Barber also seeks to make clear to her students.

“One of the biggest things our kids get is just seeing the production of syrup has to happen so far in advance,” said Barber. “All the planning that goes into it ahead of time, the logistical stuff that they have to plan for, trying to get themselves a schedule of who’s going to collect and when.”

Todd Hofheins, who boils the sap Attica’s FFA chapter collects at his family’s Maple Moon Farms, runs a maple program at Oakfield-Alabama Central School District where he works as an agriculture teacher. As such, he understands the importance of getting younger people interested in the field.

“I think, like any profession, you've got to give kids the opportunity to try it, to see it, to feel it, to do it because if you look at the average age, most producers are getting up there,” said Hofheins, husband to Attica Band Director Amanda Hofheins. “We’ve got to get kids excited about this to carry on businesses, start new traditions, new businesses.”

By introducing students to the maple industry when they’re young, Hofheins said there’s a greater chance of sparking an interest in the field that, given time and opportunity, could result in the creation of a new maple business.

“The best comment you can hear from kids when you're boiling is ‘Oh my gosh, this would be so much fun at home,’” said Hofheins. “That’s how we started at Maple Moon - my daughter said ‘Where’s maple syrup come from?’”

Hofheins, who’d collected and boiled sap with a neighbor when he was a kid, started out tapping a few trees with his daughter, Morgan, now a senior at Attica High School. Now, Maple Moon Farms taps about 1,500 sugar maples and produces somewhere around 750 or 800 gallons of syrup per year.

While Ty’s always enjoyed the time he’s spent helping out his uncle and grandpa during maple season, he’s not sure whether it’s something he’d like to pursue as a career.

“It’d be something possibly to get into on the small scale but it’s a huge investment to go into this large scale,” he said. “There’s a lot of large producers around here that have millions of dollars invested into their maple operations.”

But even a smaller-scale operation to produce syrup for friends and family would be OK, said Ty, as come February, he’d be out in the woods doing what he loves - running lines, pumping sap and boiling it down into syrup.

“It’s just that end result of you taking something naturally out of a tree and it tastes great. It’s that fulfillment,” he said. “It’s that syrup coming out of the evaporator - it's just kind of that whole process that you see from start to finish, from tree to finished product, that keeps me kind of going.”

And as to the ultimate question for any maple syrup producer worth their salt, Ty didn’t hesitate when posed the question of which breakfast item - pancakes, French toast or waffles - are the best vehicle for fresh, maple syrup.

“I’d have to go waffles,” Ty answered without hesitation. “Belgian waffles are where it's at. I mean, all of ‘em are good. I’ll have ‘em all on a weekend.” 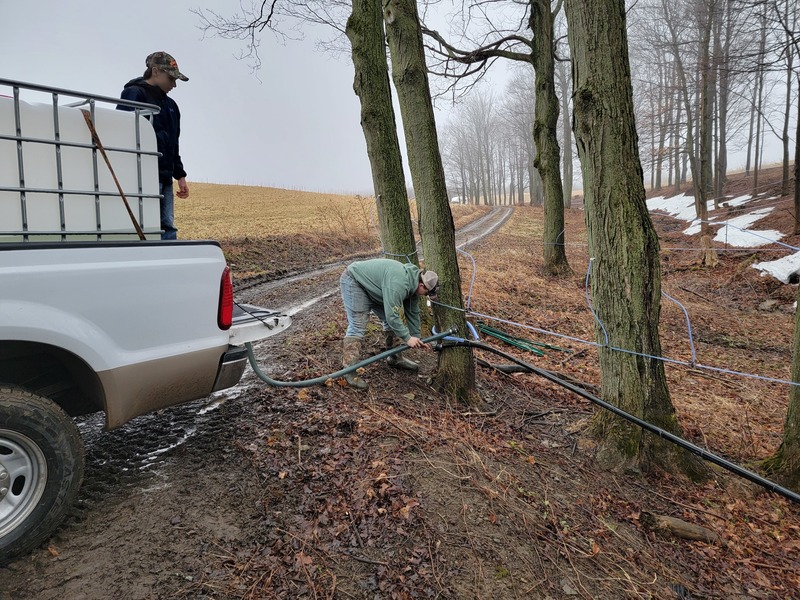 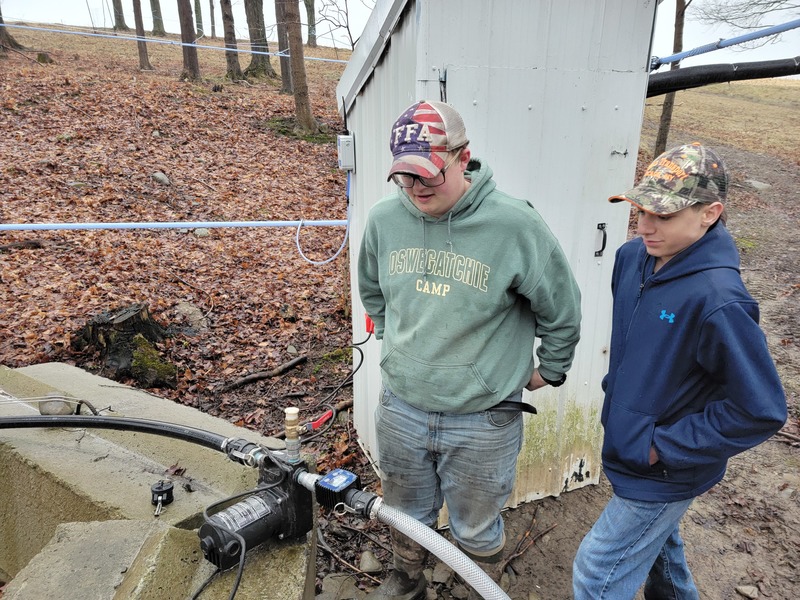 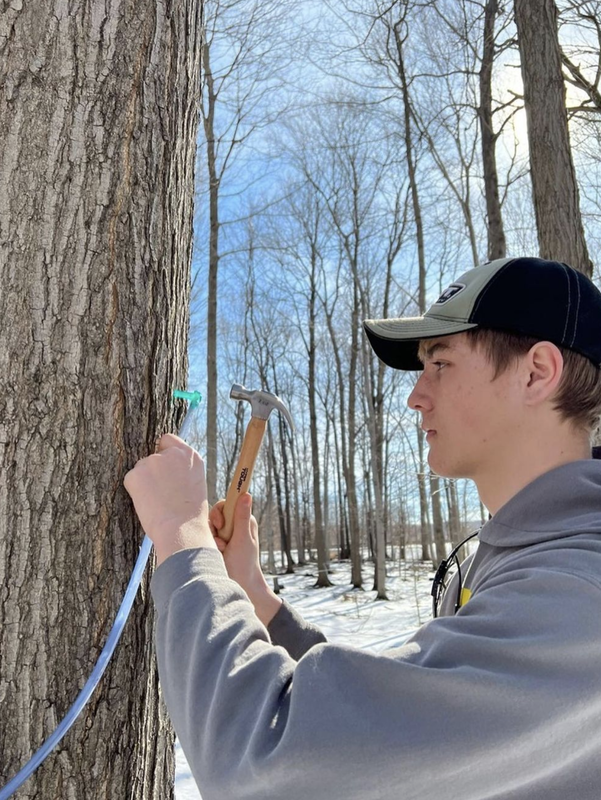 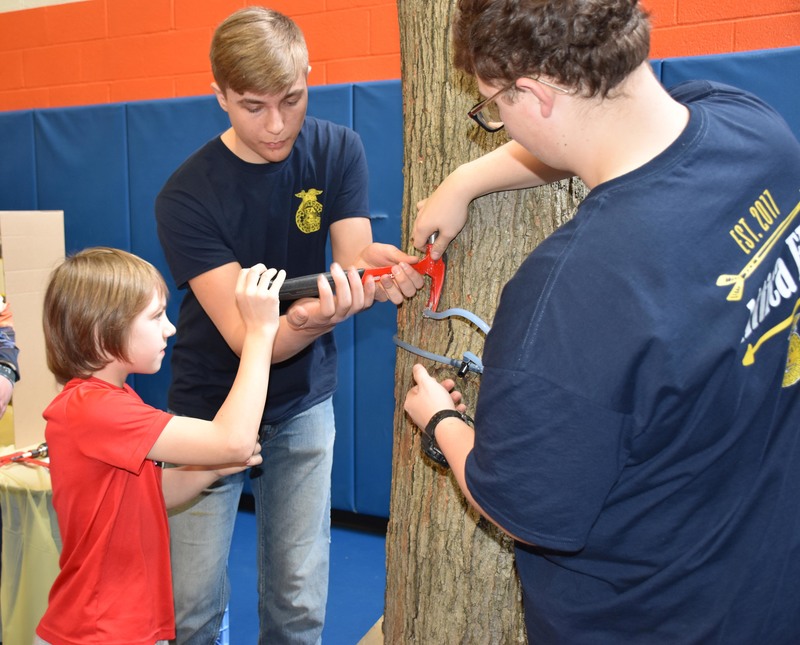 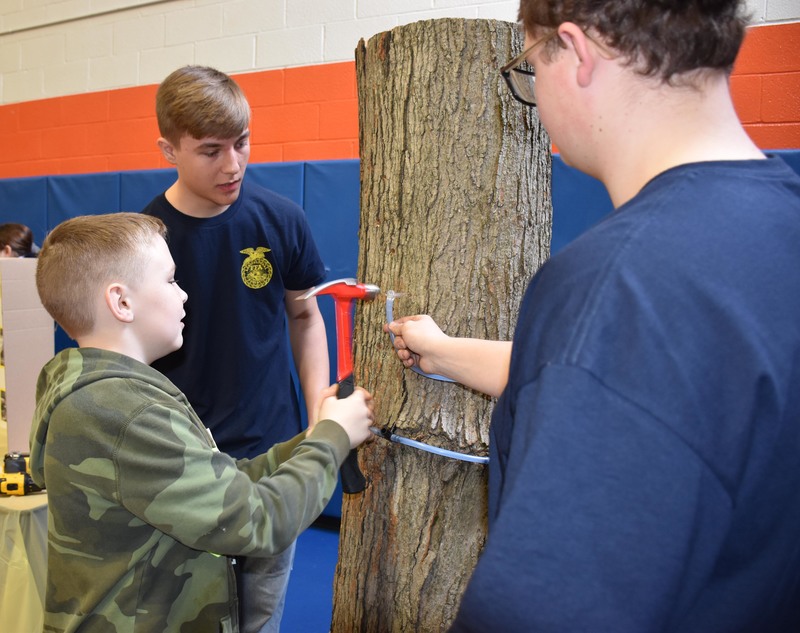 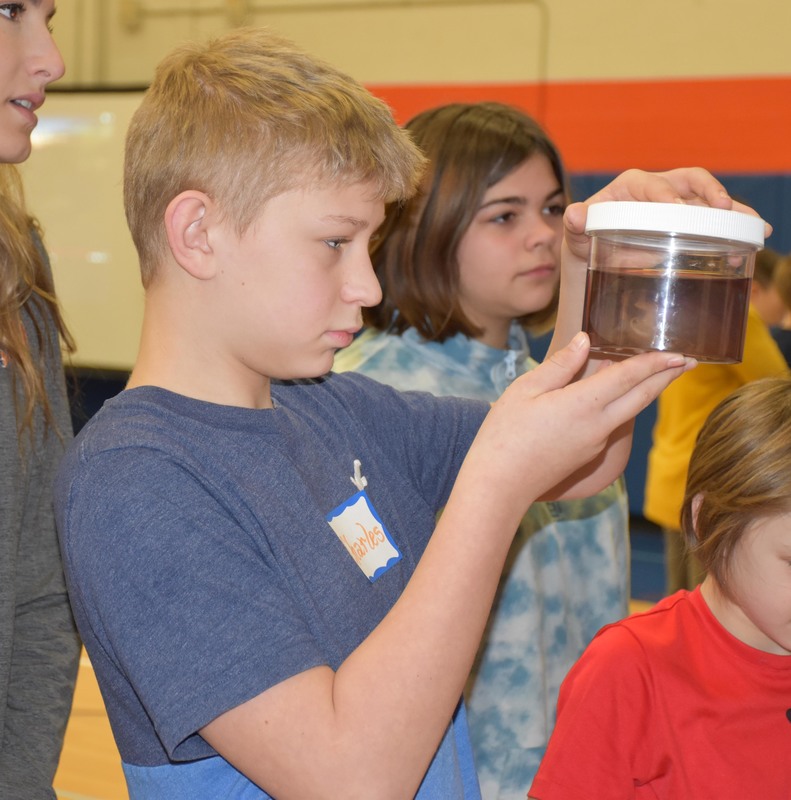 Charlie Feldman checks the hue of a container of maple syrup during Ag Career Day March 10.