Simon Lamparelli’s been thinking about joining Attica’s track and field team for a while, but never seemed to have the time.

“I’m a pretty busy kid, doing many sports,” said Lamparelli, a junior and standout soccer player whose 34 goals this past season set a new school record and placed him second in goals scores among all Section V players. “But this year I found a little time and decided to try it out.”

The decision is already paying off.

During an April 5 meet against Kendall, Simon’s first ever track meet, he competed in the 100-meter dash, his first ever race, and set a new school record by running 11 seconds flat, breaking the previous record of 11.3 seconds set 29 years ago in 1993.

Because the race was hand-timed, Simon’s time will be officially recorded as 11.24 seconds, said Coach Adam Landphair, which is still fast enough to break the old record.

“I didn’t expect to win. I wanted to win, but didn’t expect it,” said Simon. “I ran the race and at the end someone told me I broke the record. I was like ‘Cool,’ you know?”

Because it’s his first time running track, Simon’s not quite sure what an achievable goal time is this year, but he’s committed to lowering his 11-second mark as the season progresses.

“I feel like I have more potential than what I ran yesterday and I’m going to continue to work on that,” he said. “I’m excited for the rest of the season. I think I can really get going.”

So does his coach. Now in his 13th season leading Attica’s track and field program, Landphair is confident Simon will be able to replicate, and hopefully improve upon, his 11-second performance April 23 at the Batavia Invitational, which will be electronically timed.

“The fact that this was Simon’s first race says a lot about his natural athleticism but also speaks to the likelihood that he’ll lower that mark as he runs more races,” said Landphair. “I can’t wait for the rest of this season. I think you're going to see a lot more records fall on the girls and boys side.” 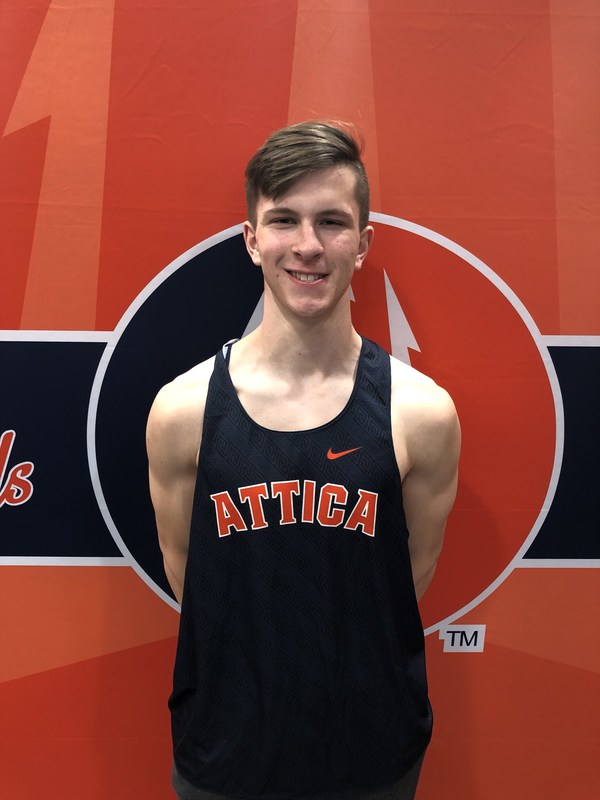 Simon Lamparelli, a junior, ran the 100-meter dash in 11 seconds flat Tuesday during his first ever track meet, breaking the previous record of 11.3 seconds that had stood since 1993. Because it was hand-timed, Simon’s time will be officially recorded as 11.24 seconds.

One of our exterior cameras captured part of junior Simon Lamparelli’s record-setting run in the 100-meter dash during last night’s meet against Kendall. Thanks to Assistant Principal John Spink for tracking it down!