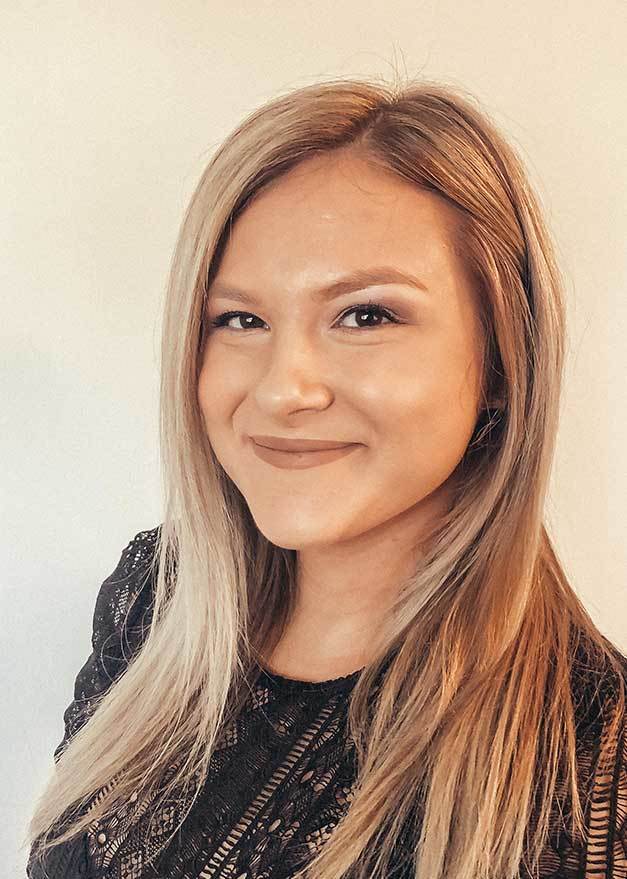 Gabrielle Gebel has spent every year since the age of 3 in school. Now 26 and a doctoral candidate in couple and family therapy at Adler University in Chicago, Ill., Gebel is looking forward to the day she can leave the classroom beyond, though it probably won’t be for long.

“My ultimate goal would be to be in a tenured job track as a university professor and work clinically in private practice on the side,” said Gebel, a 2014 graduate of Attica Central Schools. “I want to be working at a university that is affiliated with a hospital system so that I can best serve populations that are important to me.”

After graduating from Attica, Gebel headed to the University of Rochester where she earned a bachelor’s degree in psychology and biology in 2018 and a master’s in marriage and family therapy in 2020. She’s now in the last year of her doctoral program at Adler and hopes to submit her dissertation in 2024.

While her post-high school career may appear smoothly intentional to an outsider, Gebel said that’s not true.

Her initial plan, as her senior yearbook entry can attest, was “to become a world-renowned surgeon.” It was during her junior year of college while studying for the MCATs that Gebel realized a career in medicine wasn’t in her future.

“I wasn’t interested in the content, and was not looking forward to another four years of intensive study before I got to do what I really wanted: helping people,” she said. “I felt lost and was scrambling to figure out another plan.”

While she passed her MCATs - “I performed about average,” - Gebel’s career trajectory started to shift during a psychology class on relationships and emotions.

“The professor advertised an open house across the street at the medical school for a master’s in marriage and family therapy by saying ‘If you like this class, you’ll love this program,’” Gebel recalled. “I attended the open house that November of 2017, applied, and was accepted for the fall 2018 cohort. Feeling like I found the perfect fit for a career, I decided to continue my education in the field and applied for a Ph.D. in December 2019. I was accepted into the fall 2020 cohort and now here I am two years later.”

Gebel credits the teachers at Attica with not only inspiring her to pursue her chosen field but with giving her the skills she’s used to thrive in the academic world.

“She’s always been positive, and I look back on my time with her fondly,” Gebel said.

As a junior, Michelle Pitkin’s advanced placement chemistry class proved a challenge for Gebel, but one that paid dividends once she graduated high school.

“She was tough and the rigor of her class well prepared me for college,” Gebel said.

So did the teaching style of Judson Heck, Gebel’s AP psychology teacher.

“He taught like a college professor and I appreciated his teaching style when I got to college and already knew how to be successful in that environment,” said Gebel.

Both Heck and Pitkin described Gebel as an unusually driven student.

“You just remember students who were hard workers and she had a direction,” Heck said. “She was doing her thing and she knew exactly where she was going.”

Added Pitkin: “Tenacity, grit and perseverance are three words that come to mind when I think of Gabby. It’s a pleasure to see Attica alumni go out into this big world and make something of themselves. I couldn't be more proud of her.”

In the years since Gebel graduated, Heck would occasionally hear updates about how she was progressing in her studies - either through Gebel’s mother, Diane, a middle school social studies teacher at Attica, or from Gebel herself when she’d return to Attica to substitute teach.

Upon learning of each new achievement, Heck would usually think the same thing to himself: “That sounds about right.”

“I’m really proud of her. That’s an achievement. It takes a lot,” Heck said of Gebel nearing her doctorate. “I’d like to say ‘Good luck’ to her but there’s nothing about luck. It’s hard work and putting your nose to the grindstone. She doesn’t need it anyway. She could come back and teach me things now.”

‘I truly love my job’

In addition to continuing work on her dissertation, Gebel is also an active researcher.

Much of her scholarship to this point has centered on access to reproductive healthcare. She even traveled to Puerto Rico this past April to present at a conference of the International Family Therapy Association.

Gebel also teaches and supervises graduate students at Adler University and works as a relationship therapist at Relationship Therapy 312, a private provider in the Chicago area.

“My clients seek me out for a variety of reasons but most commonly it’s for relational issues,” said Gebel, who typically sees between six and eight clients per day.

While her daily job responsibilities center on helping clients confront and work through, in some cases, the most traumatic experiences of their lives, Gebel said she truly loves her job.

“I get to make genuine connections with people by holding space for some of the worst moments of their lives while also celebrating some of the happiest moments. I get to laugh and cry with clients, often happening within the same hour,” she said. “I myself am the greatest tool that I have as a therapist, which is incredibly rewarding. However, because I use my person as an instrument, the work is also very exhausting which is why taking care of myself is important to me.”

While a lot’s changed for Gebel since she last roamed the halls of Attica High School as a student, her advice to the district’s current crop of high schoolers is the same she gave to her fellow graduating seniors during her commencement address back in 2014.

“The message that I gave in my graduate speech in 2014 was to ‘Dream big,’” Gebel recalled. “I stand by this advice. I would encourage incoming students to dream as big as the world. Aim for the moon, and you may land among the stars. Use your time in high school to prepare you for the next chapter of your life, whatever that is. There are many life lessons that can be learned while in high school, don’t miss out on them.”

Author’s note: The preceding piece was the first in a planned series spotlighting Attica alumni who are achieving success in their chosen field. If you know an Attica grad we should consider featuring, let us know! Contact Public Relations Specialist Matt Leader at mleader@gvboces.org.